Genetically Modified Corn on the Cob, a New Step for GMOs 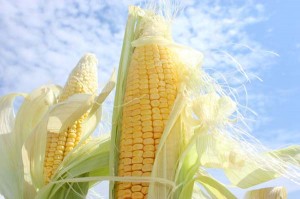 Corn on the cob is for sale at most grocery stores this summer and depending on where you shop it may be Monsanto’s Bt sweet corn. Since this corn is unlabeled, it's quite possible that you might be buying it without knowing it. Here's some basic information to help you understand more about this corn variety and why it's a concern.

This unlabelled item is a new kind of ready-to-eat corn. It is genetically modified with Bt, the bacteria Bacillus theringiensis, commonly used on crops as a pesticide. Once the bacteria Bt is ingested by an insect, the insect’s intestinal tract fails, killing them within a couple of days.

Bt has been used as a pesticide spray for decades but farmers found that it washes off and biodegrades in sunlight. Now Bt is genetically tied into the corn plant as a built-in pesticide. This is the first genetically engineered Monsanto product being eaten directly by consumers with minimum processing. Bt Corn has been on the market since 1996, but had only been used in processed foods like corn syrup. The Bt-toxin is claimed to be safe for humans and animals, supposedly destroyed by the human digestive system. It is unclear what, if anything, will happen when an unprocessed food like sweet corn is eaten by consumers. The long term health and environmental risks which GMOs pose have not yet been adequately investigated.

Widespread cultivation of Bt corn could have major environmental and societal ramifications. Farmers must be careful to avoid creating Bt-resistant strains of the very pests that the poison targets. It also theorized that such genetically modified produce could explain the drastic increase in childhood food allergies.

Talk to your grocers and ask where their produce is coming from!

Learn about Bt in Organic Farming vs. Bt in GM Crops.