We mindlessly toss an onion into almost every savory dish we eat, but unless we’re making onion rings or French onion soup, they rarely take center stage. That is, of course, unless we’re cooking with Vidalia Onions. 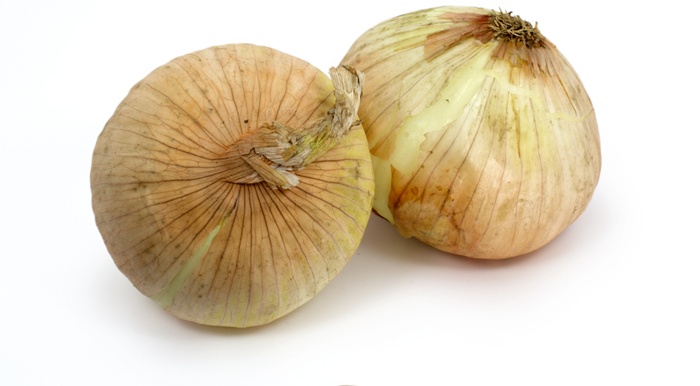 Vidalias are a protected variety of onion that has made a name for itself as “the world’s sweetest onion.” Not only are these spring onions bursting with flavor, they also have a vibrant back story.

Here are seven sweet facts about Vidalia onions that will prove that these onions are anything but bland.

1. Vidalia onions can only  be grown in Georgia.

According to the Vidalia Onion Act of 1986, there are only 20 counties in the United States that are allowed to grow Vidalia onions and sell them under the trademarked name. All of them are in Georgia, centered around the small town of Vidalia, GA. In 1990, Vidalia onions became the state’s official state vegetable.

2. Vidalia onions are scientifically sweeter than other onions.

Genetics and terroir combine to create a one-of-a-kind onion. Vidalias are grown from the seed of a short-day yellow granex onion that was actually discovered in Texas. But it’s the low sulfur in Georgia’s sandy soil that is said to give the onions grown there a distinctive sweetness. The region’s climate is also an integral part of the Vidalia onion’s success.

3. Put away the Kleenex…for now.

Pyruvic acid is a chemical found naturally in onions that gives them their pungent flavor. It is also largely responsible for making you cry when you cut into one. But you can smile as you chop your Vidalia onion, knowing that the onion’s low levels of pyruvic acid will make it both sweeter and less likely to make your eyes water. “The only time that Vidalias make you cry,” one onion enthusiast writes, “is when they’re all gone and you have to wait for next year’s crop.”

Since their discovery during the Great Depression, Vidalia onions’ name recognition has grown exponentially. The $150 million industry is responsible for a lot of jobs in the region and the Vidalia onion growers in rural Georgia are united under the organization of The Vidalia Onion Committee to market and sell their onions to the rest of the country. In order to protect the reputation of the trademarked Vidalia onion, only onions grown in the 20 designated counties around Vidalia can be sold under the Vidalia onion name, and growers must wait until the last week of April to start shipping their onions to other parts of the country.

5. Vidalias are not without controversy.

A few years ago, three prominent Vidalia onion growers sued the state of Georgia, arguing that they should be able to sell their Vidalia onions whenever they determine they’re ready to be harvested. The Vidalia Onion Committee argued that growers who rush to market and harvest their onions prematurely would ruin the reputation of the Vidalia onion, harming the rest of the growers who rely on the trademark to distinguish their onions in a competitive vegetable market. The court battle has become mired in appeals and the outcome still remains unclear.

6. There’s a lot more to learn about vidalia onions.

Apparently there is an entire museum dedicated solely to the Vidalia onion’s “economic, cultural and culinary significance.” The 1,300 square foot museum is located in Vidalia, Georgia and currently has an astounding 4.5 star rating on TripAdvisor.

7. Vidalia onions are a versatile ingredient.

Vidalia onions can be used in place of a sweet onion in any recipe, but with an onion this special it’s worth finding a dish that will highlight its unique flavor.

According to the New York Times, this is the most popular way to prepare a Vidalia onion in Georgia:

Cut a cone from the top of a whole, peeled onion and fill the little cavity with butter. Add some salt and pepper, wrap it in foil and roast it at 350 degrees for 45 minutes to an hour. People get fancy and tuck in a bouillon cube or add a few drops of Worcestershire to create something that tastes like a distant cousin to French onion soup. Others wrap a couple of pieces of bacon around the buttered onion and cook it on a grill.