The great thing about Thanksgiving dinner is that no matter how much potatoes, cranberry sauce, stuffing, and green bean casserole you eat, there's always room for dessert. What to have for dessert -- that's another question entirely. Here are 10 totally awesome desserts to serve at your Thanksgiving feast. 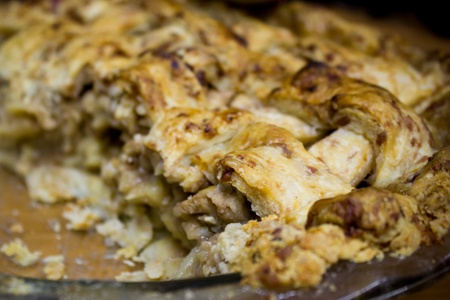 Combine flour, sugar and salt in bowl of food processor and pulse to blend the ingredients. Add butter and pulse until mixture looks like crumbly sand.
Add cheese and pulse again until combined and cheese is worked into the mixture and cut into small chunks. Turn  mixture out into a bowl, drizzle in 6 Tbsp cold water, and mix with a rubber spatula until the flour is moistened. Add another Tbsp water, if needed. Divide dough in half, shape each half into a ball and flatten to a disc. Rest the dough to relax the gluten, 30 minutes.
Make the filling:
Combine apples, sugar, flour, light brown sugar, cinnamon and nutmeg in a large bowl and toss to combine.
Preheat oven to 425°F. Adjust baking racks to center of oven.
Roll out 1 disc of dough on a lightly floured surface to a 12-inch round. Transfer to a 9-inch pie dish. Add apples in an even layer and dot with butter.
Lightly brush the edges with egg wash. Roll out next dough round, slightly smaller than first. Cover top of apples with the second pie dough, pressing the edges to seal the crust. Trim the crust so you are left with a 1-inch overhang. Tuck crust underneath itself so it's flush with edge of pie plate. Crimp edges decoratively.
Brush pie with egg wash and sprinkle with turbinado sugar. Make 5 air slits in the center of the pie. Place the pie on baking sheet and bake for 25 minutes.
Lower oven temperature to 350°F and bake for 45 minutes longer. Cool to room temperature, at least 3 hours, before slicing.

Preheat oven to 375°F. Put the apples in a 9x13x2 inch Pyrex casserole dish.
Sprinkle the lemon juice over the apples. Sprinkle the cut vanilla bean, or extract over the top of the apples. Stir the mixture around a bit with a spoon.
Combine maple syrup, cinnamon, and quinoa (or gluten-free oatmeal) in a bowl. Cut in coconut oil. Sprinkle mixture over apples. Bake 45 minutes or until topping looks crisp. 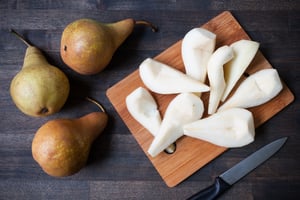 Place rack in the center of oven and preheat to 350 degrees F.  Take out 8×8-inch baking dish and set aside.

First prepare filling.  Cut top stem and bottom butt off each pear.  The bottom will give you a stable base to peel the pears.  Use a small paring knife to peel pears.  Slice each pear in half.  Use a small teaspoon gently run down the length of the inside of the pear, removing the fiberous inside spine, and scoop out seeds.  Dice pears into hearty bite-size chunks and place in baking dish.  Pour cranberries into dish.  Top with sugar, cinnamon, and lemon juice.  Toss lightly and set aside.

Prepare topping.  Whisk together flour, brown sugar, raw sugar, cinnamon, nutmeg, salt, and oats.  Add unsalted butter  and incorporate with your fingers.  Work butter into the topping mixture until it is well incorporated and some butter bits are still the size of oat flakes or small peas.  Add about 1/3 of the topping mixture to the pear and cranberry mixture.  Toss to incorporate.  Place the remaining topping on top of the mixture.

Bake for 40-45 minutes, until bubbly and delicious smelling.

Remove from oven and allow to cool for about 20 minutes before serving.  This dish is perfect served warm with vanilla ice cream.

Crumble lasts for up to 3 days, covered, in the fridge.

Place bread in a greased 3- or 4-qt. slow cooker. In a large bowl, combine eggs, milk, pumpkin, brown sugar, butter, vanilla, cinnamon and nutmeg; stir in cranberries. Pour over bread cubes. Cover and cook on low for 3-4 hours or until a knife inserted near the center comes out clean.

For sauce, in a large saucepan, bring sugar and water to a boil over medium heat. Cook until sugar is dissolved and mixture turns a golden amber color, about 20 minutes. Gradually stir in cream until smooth. Remove from the heat; stir in vanilla. Serve warm with bread pudding.

Adapted from Taste of Home

If you want to make your own pastry, you can go to Smitten Kitchen for her recipe, use your own, or use a store-bought pie crust.
Preheat oven to 375°F. Cut squash in half. Scoop out seeds and place on baking sheet with skin down, orange "meat" up. Brush tops with olive oil and sprinkle 1/2 teaspoon salt on top. Bake about 30 minutes until tender. Set aside to cool slightly.
While squash is roasting, melt butter in a heavy skillet and cook onion over low heat with the remaining half-teaspoon of salt and pinch of sugar, stirring occasionally, until soft and lightly golden brown, about 20 minutes. Stir in cayenne.
Increase the oven temperature to 400°F. Mix squash, caramelized onions, cheese, and sage together in a bowl.
To assemble pie/galette, roll out pie crust and place on an ungreased baking sheet. (If making your own, roll it out on a floured surface and then transfer to baking sheet.) Spread squash, onions, cheese and herb mixture over the dough, leaving a 1 1/2-inch border. Fold the border over the squash, onion and cheese mixture, pleating the edge to make it fit. The center will be open.
Bake until golden brown, 30 to 40 minutes. Remove from the oven, let stand for 5 minutes. Cut into wedges and serve hot, warm or at room temperature. 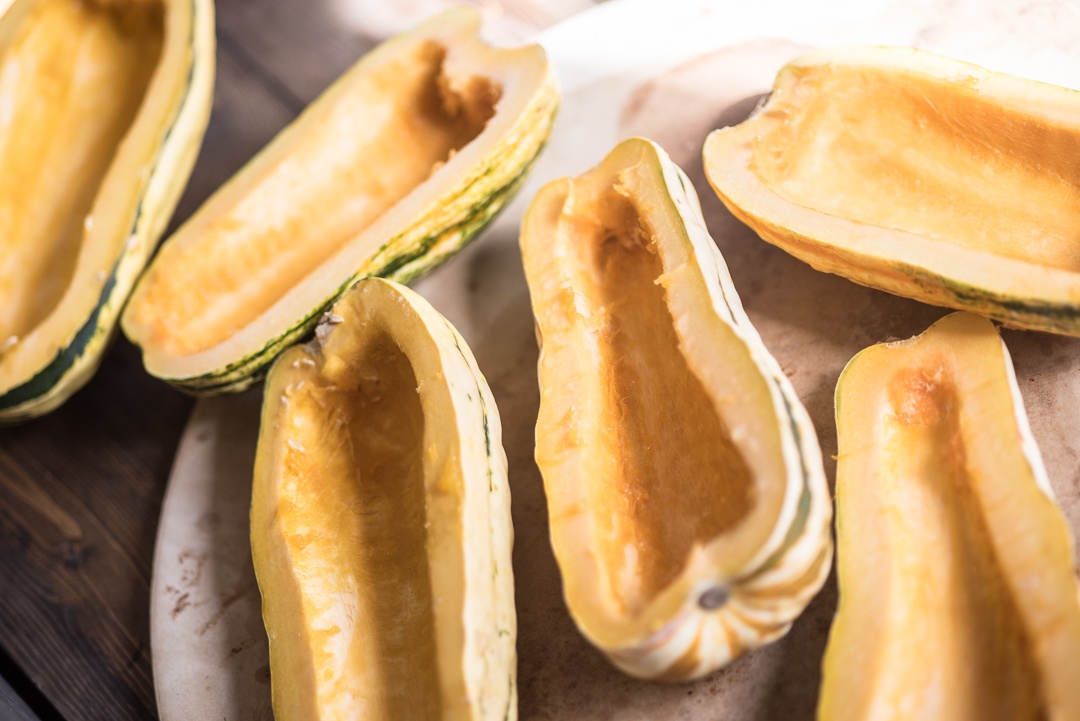 Preheat the oven to 350°F. Cut the delicata squash in half, de-seed, place in a roasting pan with a pat of butter in each half and roast until soft, about 30 mintues.

While the squash is cooking, roll out your pate brisee and line a tart or pie pan. Set aside, preferrably in the fridge, until ready to fill.

Once the squash has cooked and cooled, spoon the flesh out and puree. The puree should equal about 2 1/2 cups.

In a large bowl add the delicata puree, and mix in the rest of the ingredients. Beat 2 eggs plus one yolk, until homogenized, and add to the mixture. Then mix in 1-1/4 cup heavy cream. Pour mixture into pie shell and bake for about 1 hour, until just set.

Half way through, turn the pie 180° to ensure even cooking. Allow to cool, and serve along with whipped cream or vanilla ice cream.

Adapted from The Avocado Pit 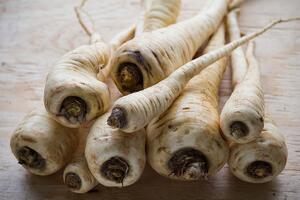 Heat the oven to 350°F. In a large pan bring water to a boil, add parsnip pieces, and cook until easily pierced. Drain. Combine parsnips with the next 7 ingredients. Pour into pie shell and bake until a knife blade comes out clean, about 30 to 40 minutes.

While the pie is still warm, spread with the marmalade (you may strain it if you want a more glazelike topping) and sprinkle with the sliced almonds.

To make pumpkin purée from scratch, cut medium-small sugar pumpkin in half. Scrape out insides (reserving the pumpkins seeds to toast) and discard. Line baking sheet with Silpat or foil. Place pumpkin halves cut side down on the lined baking sheet and bake at 350°F until fork can easily pierce them, about 1 to 1.5 hours. Remove from oven, let cool, scoop out pulp. Alternatively you can cut the pumpkin into sections and steam in a saucepan with a couple inches of water at the bottom, until soft (strain before using). If you want the purée to be extra smooth, press the pulp through a food mill or chinois.

Mix in pumpkin purée. Stir in cream. Beat together until everything is well mixed.

Pour filling into uncooked pie shell. Bake at a high temperature of 425°F for 15 minutes. Then after 15 minutes, lower the temperature to 350°F. Bake for 45 to 55 minutes more, or until a knife inserted in the center comes out clean. (About half-way through the baking, you may want to put foil around the edges or use a pie protector to keep the crust from getting too browned.)

Cool the pumpkin pie on a wire rack for 2 hours. Note that the pumpkin pie will come out of the oven all puffed up (from the leavening of the eggs), and will deflate as it cools.

Line baking sheet with foil. Pierce sweet potatoes in several places with the tip of a paring knife. Place on the baking sheet and bake 40 to 50 minutes, until soft and oozing.

Remove from oven and when cool enough to handle, peel and place in a food processor fitted with the steel blade (you can also blend the mixture with a hand blender). Turn the oven down to 350°F. If not using a crust, butter a round 9-inch baking dish.

Measure out 1 1/2 cups of sweet potato purée (store any extra purée in the refrigerator and enjoy with a meal). Place purée in the food processor, or in a bowl if using a hand blender, add remaining ingredients (except the crust) and blend until smooth and creamy. Scrape into baking dish or crust. Place on a baking sheet and bake for 45 to 50 minutes, or until set. Remove from oven and allow to cool completely.

In medium-mixing bowl cut shortening and salt into flour by hand or with a pastry blender hands until it's the texture of cornmeal. Sprinkle 1 Tbsp ice water over mixture and mix just until dough is moistened. Repeat by adding 6 to 8 Tbsp water (one at a time) until all dough is just moist. Take care not to over mix.

Divide dough in half and roll into a ball. Roll 1 ball into a circle to fit a 9 to 10-inch pie plate. To transfer pastry to pie plate, wrap it around a rolling pin and ease it into pie plate. Be careful not to stretch the pastry. Trim it even with the edges of pie plate.

Roll remaining pastry into 12-inch circle. Place on top of filling. Trim off 1-inch beyond edge of the pie plate. Crimp edges as desired. Cut slits to allow steam to escape when baking. Sprinkle a little sugar and cinnamon over the pie.

Cover edges with foil to prevent over browning. Bake for 25 minutes. Remove the foil and bake for another 20 to 25 minutes, or until it is golden brown. Serve warm with vanilla ice cream.

Do you have any favorite Thanksgiving desserts? Share in the comments below!