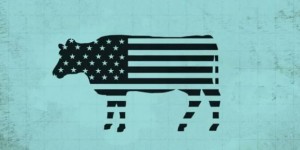 An interesting video posted on the NPR food blog The Salt investigates How Much Does a Hamburger Cost. While a burger at a fast food restaurant may cost less than a couple of bucks, the environmental and societal costs are much higher and long lasting. In order to help reduce these long term expenses is the idea of Meatless Monday. Just eating meatless meals one day a week can help reduce the American dietary influence on the planet.

This week's Meatless Monday Recipe utilizes many of the items found in your boxes! 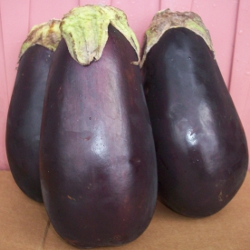 2. Transfer the chopped tomatoes to a nonreactive bowl. Add 2 tablespoons of the basil, the vinegar, 1 tablespoons of the olive oil, the garlic, the 1/2 teaspoons of salt and several grinds of pepper. Using an immersion blender, process until a chunky vinaigrette forms. (Or, pulse the ingredients in a standing blender.) Adjust the seasonings with salt and pepper. Set aside.

3. Prepare a medium-hot fire in a grill.

5. Grill the eggplant slices, turning once, until softened and grill-marked on both sides, about 12 minutes total. Transfer to a cutting board. Grill the corn, turning frequently, until charred in spots, 10 to 12 minutes. Transfer to the cutting board. Cut the eggplant slices into 3/4-inch pieces. Using a chef’s knife, cut the ears of corn in half crosswise. Stand each half, flat end down, on a cutting board and cut the kernels from the cob. Alternatively, remove the kernels using a kernel cutter.

6. In a large bowl, combine the eggplant, corn kernels, the remaining 4 tablespoons basil and the bread cubes. Pour in the tomato vinaigrette and stir well. Transfer to a platter or serving bowl and serve immediately.